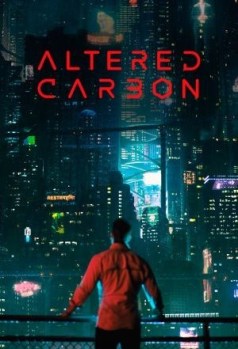 Altered Carbon is a new Cyberpunk science fiction series on Netflix starring Joel Kinnaman as Takeshi Kovacs, a former cop and rebel who has been in prison for over 200 years. In the world of Altered Carbon, human beings have become practically immortal: each person’s personality is stored in a disc in their neck (called a Stack) and that personality, unless killed in a particular way, can continue living as long as they can afford to purchase and maintain a body (sleeve). Sleeves are outrageously expensive, however, and lengthy lifespans are only really possible for the extraordinarily wealthy. Kovacs is freed from prison by one of the wealthiest people on earth in order to work on a murder case and we slowly learn his backstory as he is working to solve the mystery.

I wanted to like Altered Carbon, but I didn’t. Aesthetically, it’s incredible. The visual style of the world is gorgeous to look at but, in my opinion, it fails in most other aspects. I loved Joel Kinnanan in The Killing, but I found his accent work to be pretty bad in Altered Carbon and, while he’s been praised for his performance in the series, I thought it was mediocre at best. In fact, the quality of the acting in Altered Carbon was poor overall, though I think that Martha Higareda’s performance as Kristin Ortega was particularly egregious. Her line delivery is so consistently wooden that it’s a little embarrassing. Acting-wise, the best performances came from Will Yun Lee (as past Kovacs in a different sleeve) and Renee Elise Goldsberry (as Quillcrist Falconer and former love interest of Kovacs).

The story of Altered Carbon also failed to maintain my interest. I kept watching the show hoping for a real mystery plot to unfold, but I was ultimately disappointed. The development of the show’s main villain was handled particularly poorly as their motivations were so ridiculous and psychotic that I just couldn’t identify or sympathize with any of it.  If my boyfriend and I hadn’t been watching this show together, I would have scrubbed through at least half of it.

Jake Buvala – I Got a Dog, What was I Thinking

It’s no secret that my mother and I have been more than a little overwhelmed with our new puppy, Frankie. During out first week together, I had several ugly days where I hardly slept and my anxiety was getting the best of me.  I didn’t like Frankie, I wanted to send her back, and having her in the house was uncomfortable.  These negative feelings were making me feel horribly guilty.  I love dogs, I love animals and, right now, popular culture is telling me that Frankie and I should be having a magical relationship.

During that first week I spent a lot of time googling.  Unfortunately, a lot of the resources I found were just making me feel worse — like I wasn’t being consistent enough and generally like I was a jerk for having the negative feelings.  And then I found I Got a Dog, What was I Thinking.  Jake Buvala is a dog trainer and blogger over at 3LostDogs.  His e-book is an easy-to-read, quick and dirty guide to some of the more challenging aspects of bringing a new dog into your home, such as biting and chewing, crate training, potty training and other behavioural adjustments and issues.  The information in his book isn’t new and you can probably get it for free elsewhere, but the tone and attitude of the book were an enormous help to me and it’s probably the best $13 I’ve ever spent.

What Jake gets right is that he acknowledges that you and your new dog won’t be super best buddies immediately and that your relationship with your dog needs to be built over time.  It doesn’t make you feel guilty for making mistakes or for not loving your dog as soon as you bring them home and he provides a lot of useful information that has been terribly helpful to us.  If you find yourself in a difficult situation with a new dog, I’d recommend that you check it out!