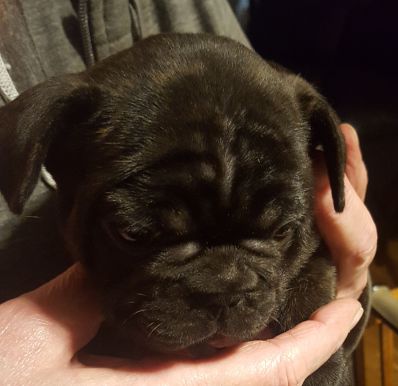 If you follow me on social media, you may have heard that my mother and I recently purchased a new puppy, a French Bulldog that we have named Chester.  Unfortunately, we won’t be able to bring Chester home for another month or so, but we are terribly excited about this new addition to our family!  Finding a new family dog has been a difficult process, one that we have been slogging through over the past few months.  Our previous dog (a miniature Schnauzer named Daisy) passed away just about two weeks before I became ill and had to be admitted to the hospital.  Since receiving my cancer diagnosis several weeks later, we have been pretty desperate to find a new companion and the process has been tense and emotionally loaded.

At first, I was 100% dedicated to adopting a rescue dog.  I felt like we had a responsibility to give a discarded animal a good home.  Many of the rescue organizations in my area, however, don’t have many dogs available, or they only have large dogs, which my mother and I just can’t manage.  A coworker had recommended one organization that is consistently rescuing and bringing a good volume of smaller dogs into our area.  I did some further research, saw that they were rescuing their dogs primarily from high-kill shelters in California, and I made up my mind that they were the best organization to work with.

And then we went to an adoption event.

The organization we chose has monthly adoption events in our area, usually at a local PetSmart.  They are above-board, they’re doing good work, and they treat and feed the dogs well.  It seems to be run by a team of two, one man and one woman.  At the event, we had a long discussion with the man (I’ll call him Bob) and he was adamantly against our adopting anything other than a senior dog.

Bob took one look at my mother (gray hair, walks with a cane) and decided that she would be completely incapable of looking after a younger dog.  He didn’t make any polite suggestions or ask us about how we might care for a younger dog, he just assumed and insulted.  He was very rude and he hurt my mother’s feelings.  Of course, he doesn’t know that we’re experienced dog owners or that my mother would gladly pay someone to walk the dog if she couldn’t manage, but he made unkind assumptions and acted on them in a way that was unkind and insulting.  This set my other completely against adopting a dog from that organization.

While that guy was a huge jerk, he did make some good points.  My mother is getting older and she does have mobility issues and I don’t plan to stay home forever to help her look after a dog.  After thinking about all that, I realized that we might need to reconsider.  My conscience told me that getting a senior dog would be a great idea, but I just didn’t think that our hearts could manage a lot of illness and veterinary visits  —  not to mention a possible death so soon after the death of our beloved Daisy.

And then my father suggested to my mother that we try to find a French Bulldog puppy.  Our family has a long history with French Bulldogs.  My mother adopted her first one in the early 1970s, when she was single.  Trina lived for several years after I was born and from then on we always had a French Bulldog as our family pet until 2003, when our last one passed away.  We were unable to find another Frenchie at that time and so we decided to adopt Daisy.

While I wasn’t keen on the idea of house training a puppy with everything that we have going on, once I began thinking about French Bulldogs, I began to realize how well they suit our current needs.  They are great companions who tend to bond closely with one or two people, they’re huge couch potatoes who don’t need lots of exercise and, essentially, they’re bred to be calm and relaxed pets.  They aren’t working dogs who need a lot of stimulation to be happy.  I know that, right now, this is the best option for our family.

I’ll be posting a lot more about Chester and his development in the future.  I hope you enjoy all the cute photos!

One thought on “We have a new puppy!”